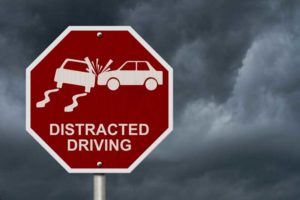 “Distracted driving is any activity that diverts attention from driving, including talking or texting on your phone, eating and drinking, talking to people in your vehicle, fiddling with the stereo, entertainment or navigation system – anything that takes your attention away from the task of safe driving,” according to the NHTSA.

If you’re a parent, or if you’re a babysitter who drives children around, you are well aware of the issue of children being a serious driving distraction.

According to an article published by ABC News, “one of the worst distractions might be something parents do every day: driving with kids in the backseat of the car.

“In a first-of-its-kind study, Australian researchers found that children are 12 times more distracting to the driver than talking on a cell phone while at the wheel,” reported ABC. The study found that on average, parents take their eyes off the road for nearly three-and-a-half minutes during a trip that lasts 16 minutes.

To enhance safety while driving with children you can:

A Legal Mess for Hernia Mesh Manufacturers
Attempting to alleviate pain with a manufacturer recommended surgical device should not cause more harm than the origina...
Read More
Zantac Pulled From Store Shelves
Having heartburn after eating certain foods can be frustrating and painful. With over the counter medicine like fast-act...
Read More
Round-Up® Costing Bayer Billions
Bayer-Global is very well known for all of the different types of products they have to aid in farming crop protection a...
Read More